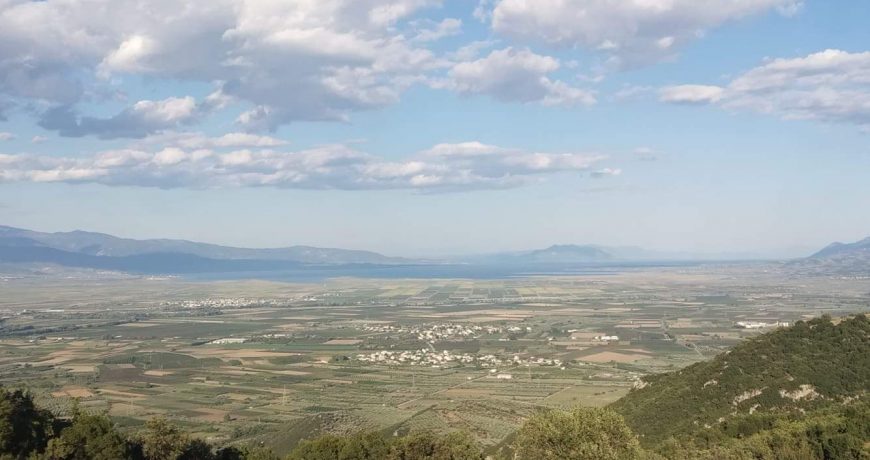 A sunny winter day, was just great for an outing with my new XP DEUS 3.2 metal detector! Everything were ready. I started exploring a scheduled area not far from my city of Lamia-Greece. (I say scheduled as it was authorized according to my metal detector usage license granted to me by the Ministry of Culture). The region had a reputation of great activity since the 1940’s and later civil war. Purpose of the trip? Was to learn how to operate the new XP DEUS metal detector as I think the best training school is the mountainside. The area is about 6 to 7 kilometers from the historic bridge of Gorgopotamos. The route lasted about 30 minutes. I finally arrived. After choosing a starting point completely randomly by observing only some features and fixed points I began to prepare the detector full of joy because, I remember it was one of my first trips. I chose the program “11-MOTION” which my XP representative and friend John Kyritsis had programmed and I started.

The first “beeps” did not come late. I was trying to figure out the identity of the target from the indications on the XP DEUS screen, and partly from the instructions I had from John. So I had some idea of ​​the target but not any experience in the research and decoding of the signals. As a beginner I had to be sure for every hit by digging up everything for training. I focused on the first target. It did not look deep to me and I used a knife. Immediately there was a gun shell, probably from the 1940’s. It was the first find and I had to keep it, then continue to discover various target. Not something special. Tin cans, aluminum foil, etc. The hours passed while I was learning the machine and the numbers which identify each target, like aluminum foil that has values constantly low on the screen ranging 30-35. The iron objects are easily defined by the low audio tone and values 8-9-10. Nevertheless, I continued unearthing most of them, only for confirmation.

It was almost noon. I saw a plateau. Let me look at it and then leave. Indeed after a while I heard a different sound but also saw the remote control values ​​in XP DEUS playing steadily. I scratch the soil slightly with my foot and put the coil back on. I realized the target moved. Probably the target is shallow. I search with my hand and immediately find an ancient copper coin. Then I felt the I had found a treasure!. The joy is indescribable. I cleaned my first XP DEUS find as I could from the soil and realized it belonged to the Byzantine period. My morale went high. Then I said that I will continue my research up to the time that is permissible under my license.

Indeed. I continued detecting and not only this, but I put out 4-5 similar coins. It was not long before the next target came. I should get out the last target and then leave I thought. I note that for the previous coins the values were 72-75 stable, except one playing 95-96, a bit larger sized than the others. With this target I now had some values that were never seen before. The target values if I remember well were 85-88. I wondered what it was. I take out the knife and start to excavate. By the time I spot the target and clean it, looked like a coin. Like the previous but this one made by lead metal alloy. Also noticed some letters on it. I thought that this coin will probably be a Byzantine because the Latin script was easily recognized. But the metal alloy did not excite me. It probably not worth anything, I thought. It’s lead. And I threw it back, at the same spot…

Time to leave. I started the way back to my city of Lamia. First I visited the archeology office and informed them of the findings. Immediately they prepared my documents, delivery and receipt protocols, also they kept a note of area I got the finds then I was about to leave. At that moment, an archaeologist informed me that the next time I go and find something, even if it is corroded, if it has the shape of a coin, I should not throw it away and hand it over. Immediately my mind went to the lead coin I threw away, but didn’t pay much attention.

The next day then, again for detecting at the same point. Without having in mind the words of the archaeologist, I again identified a target. Here we are. Pretty surface should have been. I’m pinpointing with the machine and I started to dig with the knife. Nothing. It will probably be over the top I said. Indeed. It was the same lead coin I had thrown the day before. After some time detecting, and while I had taken out 2 copper coins, I returned to archeology to deliver them along with the lead coin. Upon receipt the archaeologist as I saw she was behaving in confusion. She stared at it and copied the letters it had on one side. She left and went to another office and returned after 10 minutes. Curious as always I asked what’s going on. She answered me:

Seal with stamp have you ever heard of? That is, and probably belongs to an official. You will be informed when it is identified by the Epigraphic Monetary Museum.

And so it was. The rest are known, my finding was recognized as the personal seal of St. Symeon the metaphrast (or Translator in English). Below I quote the description of the lead seal, by the historian-numismatologist Giorca Nicolaou, that now is a permanent addition to the Monetary Museum.

Finishing, I would like to warmly thank my friend and representative of XP DEUS, John Kyritsis, for posting the St Symeon the translator lead seal XP DEUS find recovery story. As well as Carry Public Relations Officer of XP metal detector manufacturer in France also for his post on his page.

Read the museum presentation of the XP DEUS find, you can also download here http://www.nummus.gr/ht/pdf/NewsLetter12IOUL16.pdf 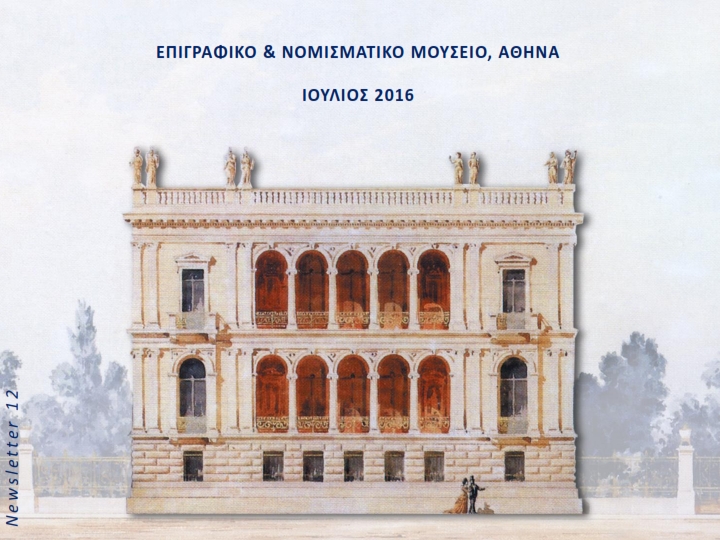 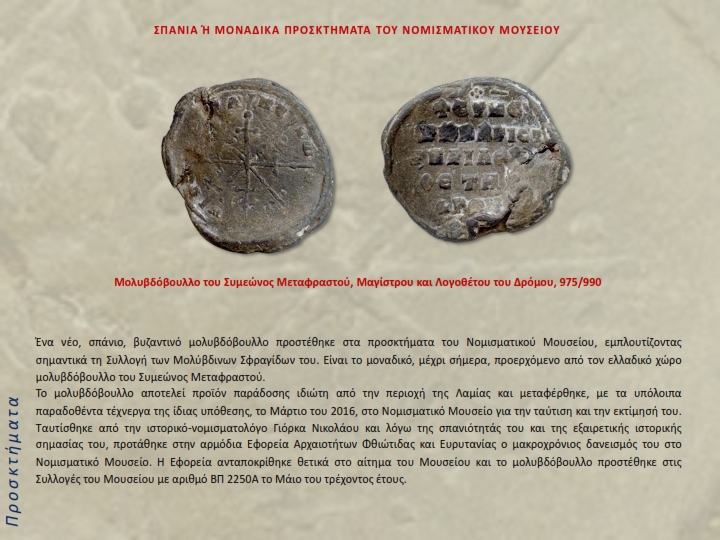 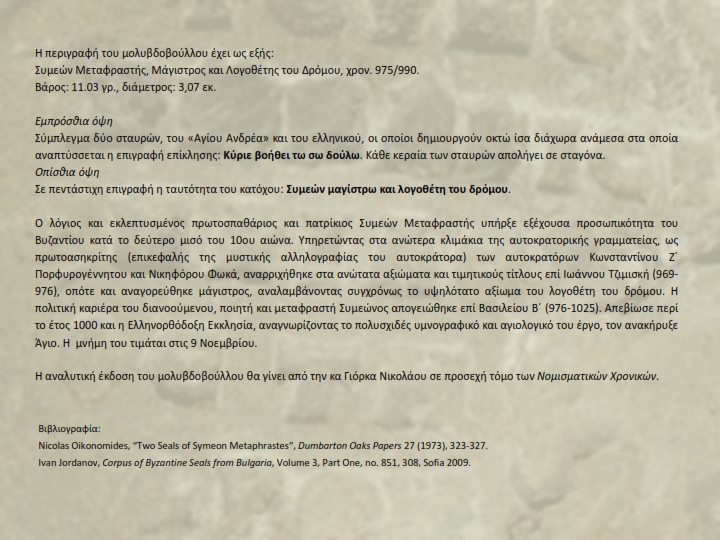 Translation of the pdf into English :

RARE OR UNIQUE ADDITIONS OF THE MONUMENTARY MUSEUM
The Lead Seal of Symeon Translator, Magister and Logothete of the Road, 975/990
A new, rare, Byzantine lead was added to the ownership of the Numismatic Museum, enriching the Collection of its Lead Seals. It is the only one to date, coming from Greece and belonging to the Symeon Translator. Lead Seal is a product of delivery by a private person from the Lamia region and was transported, with the rest delivered artworks of the same case, in March 2016, to the Numismatic Museum for its identification and appreciation. Identified by the historian-numismatologist Giorca Nicolaou and because of its rarity and the exceptional historical of its importance, it was proposed to the competent Ephorate of Antiquities of Fthiotida and Evritania that it should be long-term borrowed to the Currency Museum (Numismatic Museum of Greece). The Ephorate responded positively to the Museum ‘s request and the lead seal was added to Museum collections with BP 2250A protocol in May of this year

Front view
A set of two crosses, “St. Andreas” and the Greek one, which create eight equal divisions among which the inscription of invocation is growing: Lord help me. Every antenna of the crosses ends in a drop.

Rear view
In five-pointed inscription the identity of the holder: Simeon Magister and Logothetis of the street. The scholar and sophisticated pro-priest and patrician Simeon Translator has been a prominent personality of Byzantium in the second half of the 10th century. Serving in the upper ranks of the imperial secretariat, as (head of secret emperor’s correspondence) of Emperors Constantine Z Porphyrogenitos and Nikiforos Phokas, climbed to the highest titles and titles on emperor Ioannis Tzimiski (969-976), in which case was proclaimed as magistrate, assuming at the same time the highest rank of the “logothetor of the street”. OR Political career of the intellectual, poet and translator Symeon took off on emperor Basil II (976-1025). He died about in the year 1000 and the Greek Orthodox Church, recognizing its multifarious hymnographic and hagiological work, proclaimed him Saint. His memory is celebrated on November 9th.
The analytical version of the Lead Seal will be made by archaelogist-numismatologist Mrs. Giorka Nicolaou in a forthcoming volume of Monetary Chronicles.

About the Symeon translator you can read in Wikipedia: https://en.wikipedia.org/wiki/Symeon_the_Metaphrast 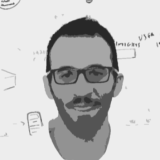